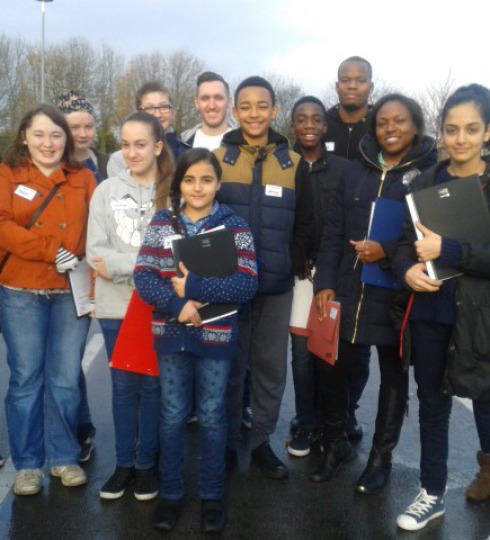 Community development and transformation is central to our work. We continually believe, hope and trust that young people can and will take positive action in and responsibility for their communities and shaping the activities within it.

Young people are full of creativity and often have ideas for projects they would like to do with us, to enhance their own skills or learning, or to help others. Working together with young people to help them realise their own ideas is an important part of our work, which supports them to become creators, rather than consumers. Over the years, young people have developed numerous projects, activities and pieces of community action for the their own benefit and for the benefit of other young people and their communities.

Here are some stories of young people-led community initiatives that M13 have had the privilege of helping young people be a part of, from the most recent, back to the start.

When, in November 2014, Manchester City Council announced they were having to make significant cuts to services, including further significant cuts to their youth funding, M13's young people decided that youth work was such a needed resource in the lives of young people that they would join with workers to campaign against the cuts.  This involved lobbying Labour Group Councillors at a budget discussion meeting early on a Saturday morning.  We also supported a petition, established in partnership with Voluntary Youth Manchester, which secured over 3000 signatures petitioning to maintain the Youth Fund at current levels.  As a result, we were invited to give evidence of the potential impact of cuts at a Scrutiny Committee meeting and the City Council decided to maintain the current budget for youth work  This was a brilliant illustration to the group that collective, planned and passionate action can make a difference to their commmunity!

In 2012, a group of young women aged 16 and 17 yrs from the Brunswick estate set up and ran a Summer Club for girls aged 10-13yrs. The group got together with M13 workers to discuss their ideas in April and we began youth work training in June, helping them gain basic youth work skills, to think through how they wanted to run the club and their aims and objectives for what they were doing. The group then ran 6 sessions, naming the club Summer Jam. The club had a significant impact on both the older girls running it and the younger girls attending. Since this project, we have begun a regular Girls Group on Thursdays, and two of the older young women still volunteer each week to support the younger girls.

Nine years' previously, three of this group were young participants in the 2003 Young People's Council Project (see below). It's exciting to see the investment made and example given by previous young people many years earlier has resulted in another generation young people following their positive example.

M12 Productionz started life through a conversation on the street, with a group of young men aged 18 - 23 yrs from the Newbank estate, about healthy eating and their need to learn to cook. This rapidly turned into thinking about how they could pass on these skills to younger children locally. Through conversation, the idea became a project where the young men would train as youth workers and run a youth club during February half-term 2011. They named themselves M12 Productionz and ran the club daily for 8-13 year olds during half term. We had massively positive feedback from parents, who were delighted there was an activity their children could attend during the school holiday, particularly run by local older young people. Each of the young leaders achieved at least one AQA award. At the end of the process they said they learned and achieved far more than they imagined they could.

In 2009, M13 were presented with the opportunity to take a group of young people to the first ever Street Child World Cup, in Durban March 2010. We worked together with an older group of young men, aged 17-19yrs, who had skills in football coaching, advocacy and human rights to help prepare and train the group of young people who would travel to South Africa.

In 2009, a group of young people aged 16-18yrs, with whom we had been working for a number of years asked if they could set up and run a youth club for local 10-13 year olds through the summer holidays, similar to one they had taken part in as young participants in the Community Spirit peer-mentoring project around drugs and racism awareness in 2004. They chose to call themselves New Generation, to signify that they were the 'new generation' of older young people running activities for younger children in the area, taking their place in a growing line of community activists. It speaks of their sense and understanding of their place in the history of young people in Ardwick making a positive difference in their community.

After two months of training and planning with M13 staff, the were ready for action and ran six clubs and trips through the summer holidays, which included drama, sports, craft and Elliott's flapjack making!

In 2008, a group of young mums from the Grove Village area, who had been directly bereaved by two fatal shootings in 2007, had a vision to offer hope and a positive message to local young people affected by the deaths. They spent months learning dance skills, training in youth work and planning, set up Demolition Dance and over the summer ran a weekly dance club, starting with a community barbeque and ending with a final community performance by the young participants.

In 2005, the Community Spirit group trained for, set up and ran a weekly youth club from July through to December, as an extension of their previous work. This included one-to-one support, trips out, informal mentoring, role modeling and providing weekly positive activities. In 2006, the group were chosen from community activists across the city of Manchester to win the prestigious 'Pride of Manchester' Award for their work.

In 2004, the Young People's Council decided to run another set of summer activities for local younger children, based on their experience the previous summer and using their own learning around anti-racism strategies, from the Rewind Anti-Racism training they participated in earlier in the year. They renamed themselves Community Spirit chose to run educational workshops for local young people around anti-racism and drugs awareness. They planned, learned and developed training programmes for 11-14 year olds, to equip them to resist drug misuse and to deal positively and pro-actively with racism. The summer programme ended with a Community Celebration of their work including a play and artwork.

In 2003, a group of local young people with whom we had been working regularly on the streets wanted to meet with us to discuss their ideas for summer activities. Little did we know they weren't thinking of the usual trip to Alton Towers! When we met, they presented their plans to 'do something for the younger kids locally, who've got nothing to do.' Young People's Council was born. We set up a series of meetings to plan what we could do together and we worked with the group to train them in basic youth work and children's work skills, child protection and health and safety. They then ran a summer club of sports, dance, arts and crafts activities with local younger children aged 7-11 yrs.